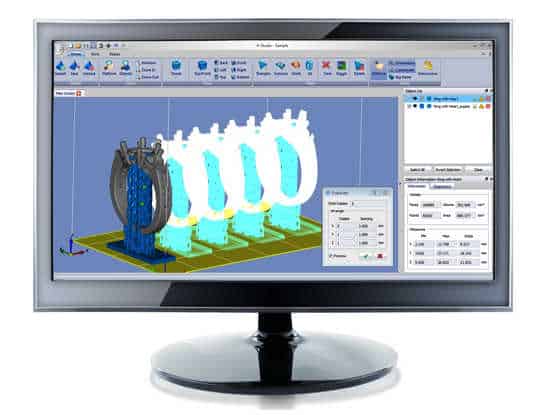 If you type the phrase “Online 3D printing software” into an online search engine such as Google® or Yahoo®, a myriad of responses will come up. Without doubt, 3D printing has become very popular within the CAD-driven community as well as in the non-technical community.

Previously, the market for 3D printers belonged to 3D Systems® and Stratasys®, who are the undisputed leaders in 3D printing technology. Although high-end 3D printing is still controlled by these leaders, a new market has arisen in which hobbyists, tinkerers, and small business owners have no difficulty in printing objects such as toys, cups, shoes and many other shapes at home.

The two key reasons why 3D printing has become commonplace are not difficult to determine. They are:

This article focuses on three topics:

Why Has 3D Printing Become Popular? 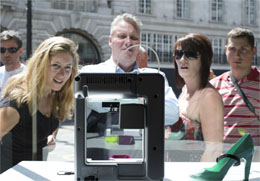 Pedestrians intrigued with 3D printer at a shop window in London, UK.

Since the advent of 3D printing or additive manufacturing, there has been an explosion in different types of products for these reasons:

Which Types of Objects is Being Printed with 3D Technology?

Believe it or not, it is possible to print just about any object with a 3D printer, provided that a template exists for the object or a CAD file created for 3D printing. Here is a list of objects, which even hobbyists and tinkerers have printed (or could print), and the list is just a tip of the iceberg.

At a more serious and higher commercial level, here is a partial list of objects being printed with 3D technology:

As mentioned earlier, just about any object can be made with a 3D printer, provided that a template exists for the object. With CAD technology, the creation of templates will become easier with time.

How Accessible Is 3D Printing Software To The Average User?

For the average user, such as a hobbyist or tinkerer, the following list is a small sample of either low-cost or free 3D printing software.

The list of 3D printing software will continue to grow, and many powerful but free 3D printing software applications will become available to the average user, especially as open-source applications. It is just a matter of time before many household products will be printed at home, robotic systems will be printed to perform many useful functions, and before many human parts and prostheses are printed for medical applications. Some years ago, the popular TV series showed the crew of the space ship ordering and printing their meals. What seemed to be a far-fetched fantasy is now a reality. The future for 3D printing looks bright and virtually limitless.